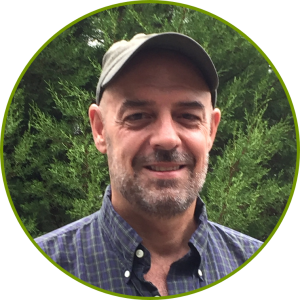 Michael is a landscape designer who has for the last 8 years taken the lead at the Native/Environmental/Xeriscape/Temescal/Garden (N/E/X/T/Garden). He organizes volunteers to assist in the rescue and improvement of the native plant garden & xeriscape, which was founded in 1988 at the top of the City of LA’s Temescal Canyon Park. The garden was abandoned from about 2000 to 2010, but since then, volunteers have removed invasives, planted hundreds of new natives around the dozens of thirty-year-old natives, and expanded from 1/2 to 3/4 of an acre at the invitation of the LA Dept. of Rec. & Parks. This always-improving sustainability demonstration garden has reached a point where it can be used as a teaching tool for a broader audience, and Michael has learned a lot along the way.

Though the exotic invasive weeds were impassibly thick and eye-high when Michael was introduced to this abandoned garden in 2010, he could still see the tops of many larger native shrubs and trees that had survived a decade of neglect, including no watering. These native survivors provided a large-scale framework for a comprehensive re-design of the N/E/X/T/Garden – after the team removed the surrounding weeds to make room for the new plantings – and the mature specimens served as an inspiration to provide them with more of their natural companions.

When the team replaced 1/4 acre of lawn in 2013, the ground was so hard that it broke the bit of the Contractor’s 2-man power auger on the first hole. With a new bit, the Contractor bored 400 holes and  planted 150 new natives. The other 250 holes were backfilled to be planted by volunteers over the next year. Now, four years after virtually all of the new plantings were completed, most of the natives have thrived, some growing enormously, and transforming the surrounding soil. Now volunteers can easily dig a new hole – where there is enough space between the original plantings – because those four-to-five-year-old natives have already created an organically-enriched, friable loam by building an entire symbiotic community around their roots. It’s almost like magic!

Michael and volunteers enjoy the garden’s unique location in the bottom of a canyon less than a mile away from the ocean. Dramatic mid-day fog reaches toward the garden and then recedes quickly as it had rushed in from the ocean. The N/E/X/T/Garden is made possible with the help of amazing volunteers and the support of Palisades Beautiful and the Pacific Palisades Garden Club.

Lawn Removal: When the N/E/X/T/Garden expanded into a 1/4-acre turf-covered area in 2013, we first re-graded entirely with a tractor in order to maximize rainfall/runoff capture in shallow swales between low berms, which resulted in a functional “lawn removal”, then we applied 3”-4” of shredded bark mulch throughout in order to suppress regrowth of grassy weeds from their remaining roots near the soil surface, and then we weeded the last stubborn little patches by hand for many months.

Design and Installation:  My planting plans complement previous designs planted nearly three decades ago. A landscape contractor installed the first 150 plants when the garden expanded by 1/4 acre five years ago, but before and after that, volunteers planted hundreds of natives.

Style Inspiration: The new plantings are arranged neatly around the old plantings so that they look “on purpose” at the time of installation, but after a few years of rampant growth, most of the plantings look somewhat “wild” and few would notice the patterns in their arrangements.

Irrigation: We water new plantings by hand every day for the first week, every two days for the next two weeks, every three days for the next three weeks, and so on until they are maintained with watering every 14 days after those 21 months of establishment, to minimize the drought-deciduous response of many species, because we want to show them at their best in order for visitors to want them in their home gardens. We plant on the last Saturday of almost every month, October-May. The watering schedules pile up on one another in ways that bring us to the garden most days of the week, on average, though this burden eases toward the end of the non-planting season. There is a backup drip irrigation system under the six large sycamores (Platanus racemosa) and a backup spray-irrigation system in the 1/4 acre that we added five years ago, but I have never used them.

Maintenance: I help to improve the garden with an ever-changing team of volunteers. Our main volunteer effort is on the last Saturday of every month, 9am-4pm – an event which has recurred 90+ times already.

Favorite Element: It might seem ironic, given my profession as a Garden Designer, but my favorite “element” in the N/E/X/T/Garden happens to be where some natives have spread themselves, contrary to the approved planting plans! I enjoy this not only because I like surprises but also because these procreative native varieties are letting me know what microclimates suit them best. The most prolific of these varieties include narrow-leaf milkweed (Asclepias fascicularis), ashyleaf buckwheat (Eriogonum cinereum), red island buckwheat (Eriogonum grande rubescens), wright’s toothed buckwheat (Eriogonum wrightii dentatum), and Hall’s bush mallow (Malacothamnus fasciculatus), all of which tolerate part-sun but thrive in full-sun at the N/E/X/T/Garden, with our “tough love” watering regime.

Biggest Challenge:  Because of where the N/E/X/T/Garden is located – in the top/northeast corner of a long and narrow city park – it abuts the back yards of more than a dozen private properties, each of which has presented its own “neighbor issues”, over the years, by not respecting the public property line. All of these “neighbor issues” have required more than a little creative problem-solving, diplomatic discretion, and hard work to resolve, and abiding patience.

Advice: Even the most reliable references can provide only an approximate idea of which native varieties might or might not thrive – and how big they might grow – under any particular conditions in any particular location. So, my advice is to try diverse species – experimentally, and just a few of each variety – then let the plants themselves tell you (over time) what works for them (or not).