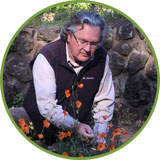 I’ve heard that California native plants go dormant in the summer.
How do I keep my native garden looking its best during the summer?

California is the most spoiled of the world’s Mediterranean climate areas due to the vast scale of our increasingly engineered water-delivery systems. All we have to do is turn on the faucet, and even in droughts, cheap water always emerges from the tap. That’s not the case in the other Mediterranean climates of the world, however, where most treat water as the precious, limited resource that it is. It’s doubly ironic then that of the world’s Mediterranean climates, California’s is the hottest and has the longest dry period — and yet we have the cheapest water! This has created an illusion that water-thirsty, turf dominated landscapes are appropriate for our climate, when in reality they are not. As Californians it’s our responsibility to use water wisely, and in our landscapes, California native plants offer both natural resource conservation and habitat benefits.

The vast majority of California’s native plants have adapted to our unique climate and are summer-dormant, especially those that are drought-tolerant and found at lower elevations where most of us Californians live. Coming to grips with our summer’s dry Mediterranean climate has bewildered many who move here. Few people, especially those of us who are continually fascinated by plants, fully embrace the reality of a summer dry garden.

There are so many different ways to address this topic, but here’s the quick and easy answer: Plan ahead!

Select plants that will bring summer interest to your garden, whether it is the silvery trunks of summer-dormant California buckeye tree (Aesculus californica) or the spiky silver-grey rosette and towering infructescence of chaparral yucca (Hesperoyucca whipplei).

Many native plants reach peak flowering in summer and fall. Some are well-known garden plants like the California fuchsia (Epilobium [formerly Zauschneria] canum). Others are less well-known, but equally showy, such as many of the color forms of desert willow (Chilopsis linearis), a deciduous (rarely evergreen) shrub to small tree. Desert willow reaches peak flowering in late spring, but in hot areas, it is easily brought into repeated bloom through summer and into fall by deep-watering the plant’s root zone every two to four weeks during the dry season.

Think, too, of texture contrast to bring visual interest to your summer garden. A dense mass of wire grass (Juncus patens) adds vertical stiffness to a planting, as do strategically-placed clumps of deer grass (Muhlenbergia rigens). Though most think of wire grass as a plant of damp or wet areas, in gardens it is surprisingly adaptable to a range of conditions and thrives even in heavy clay. The same applies to deer grass
— though you should know that deer grass is a warm season grower.
If you cut it back (I almost never do, but many seem to want to know when to do this), be sure to do this in spring just before the new growth emerges in late spring. Some bunches never seem to recover their graceful form if they’ve been cut back incorrectly

If all else fails, remember that the summer browns and greys of California’s dry and dormant plants are beautiful colors, too, and can be used to great effect in your native plant garden.

Bart O’Brien has been the Director of the Regional Parks Botanic Garden in Tilden Regional Park in the Berkeley Hills since late 2013. A fifth-generation Californian, Bart is an authority on California flora and flora of northwestern Baja California, Mexico. He is also an accomplished collector, grower, photographer, lecturer and author. He has helped write numerous books and publications, including the award-winning California Native Plants for the Garden (2005). Bart was named Horticulturist of the Year in 2005 by the Southern California Horticultural Society and was listed as one of “The 100 Most Powerful People in Southern California” by the editorial staff of the Los Angeles Times/West Magazine (Aug. 13, 2006). In 2018, he was named a Fellow of the California Native Plant Society.