If you live in or visit northern California, it is likely that you have driven past it and not even realized. If you’ve driven over the Benicia-Martinez Bridge along Highway 680 or taken Amtrak from the Bay Area to Suisun City, Davis or Sacramento, then you’ve traveled right through it. Suisun Marsh is located in Solano County, CA, and is part of the San Francisco Bay / Sacramento-San Joaquin River Delta estuary ecosystem. It is one of the largest contiguous brackish marshes remaining in the United States, covering over 69,000 acres (28,000 hectares) of tidal and managed seasonal wetlands. It provides key wintering area for waterfowl and supports a number of sensitive plant and animal species including the Salt Marsh Harvest Mouse (Reithrodontomys raviventrishalicoetes, California Ridgeway’s Rail (Rallus obsoletus obsoletus), Suisun Thistle (Cirsium hydrophilum var. hydrophilum), and Soft Bird’s Beak (Chloropyron molle ssp. molle). 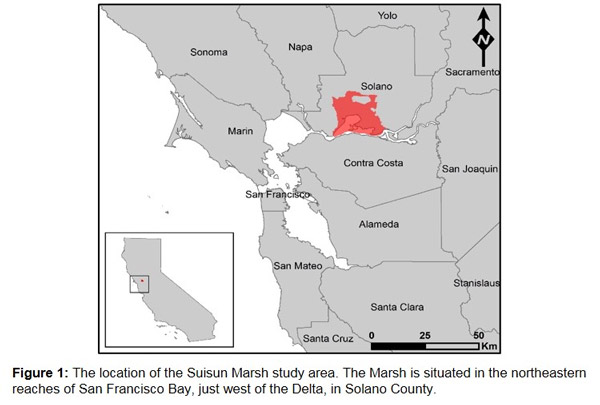 While Suisun Marsh may go unnoticed to many, it has been front and center for countless ecologists, biologists, naturalists and hunters alike – for its rich wildlife, endemic and unique species, and ongoing natural and human-caused changes occurring in the marsh. For all these reasons and more, Suisun Marsh is a very loved and distinctive place that many people and agencies are striving to protect.

The California Department of Fish and Wildlife, Vegetation Classification and Mapping Program (VegCAMP) is just one group that has invested considerable energy in supporting the conservation of Suisun Marsh. Since 1999, VegCAMP has mapped the vegetation of Suisun Marsh every three years, making the summer of 2015 the 7th triennial vegetation survey (read the reports here). Each map delineates patches of vegetation in the marsh that are 1/4 acre (0.1 hectare) or larger and attributes it with the appropriate vegetation type as well as other characteristics including average vegetation height and percent cover. The amount of information that can be gleaned from such a long, on-going, fine scale mapping project can make your head spin. Some examples include: detecting and monitoring changes in preferred habitat for the endangered Salt Marsh Harvest Mouse, tracking the spread of species of concern including invasive strain(s) of common reed (Phragmites australis) and perennial pepper weed (Lepidium latifolium), correlating management activities with vegetation changes, providing baseline data for current and future restoration and climate change studies, and so many more purposes.

For this project, we define species of concern as any species that spread rapidly, displace native species, and decrease diversity and habitat quality. Common reed is one such species of concern, because it is so widespread and has rapidly increased in the Marsh since 1999 (Figure 3). Vegetation maps compared across time show that common reed has increased by 216% over the entire Marsh, starting with only 863 acres in 1999 and expanding to 2,731 acres in 2012 (contact VegCAMP for most recent report). The vegetation maps are used as a tool to show where species like common reed are increasing rapidly or displacing preferred habitat for the Salt Marsh Harvest Mouse so that losses can be understood and minimized.

Suisun Marsh is an important resource that is owned and managed by several agencies and private entities, but the management is highly regulated and coordinated as one unit. The Suisun Marsh Habitat Management, Preservation, and Restoration Plan was completed in 2014. This plan sets 30-year goals for over 5,000 acres (2,000 hectares) of tidal marsh restoration and over 40,000 acres (16,000 hectares) of managed wetland enhancement in Suisun Marsh (CDFW et al. 2014). Already many small restoration pilot projects, including the Blacklock Project, have been implemented from which land managers can learn from and improve upon their methodologies (DWR 2006). Fine scale vegetation maps are crucial for tracking the progression of the vegetation and channel morphology for these sites.

Whether you’re into the casual plant hike or the nitty-gritty science, Suisun Marsh has something for you. So go check it out, and if you are so inclined, look at the vegetation maps on the Biogeographic Information and Observations System (BIOS) on the CDFW website. There are many more ways this dataset can be explored; if you have a research interest please don’t hesitate to utilize this publicly available data or contact VegCAMP for any questions or assistance.

Rachelle Boul is an environmental scientist with California Department of Fish and Wildlife’s Vegetation Classification and Mapping Program (VegCAMP).