CNPS recently described more than 30 new herbaceous alliances, including annual types such as white-tip clover swales (Trifolium variegatum) and popcorn flower fields (Plagiobothrys nothofulvus) in the second edition of A Manual of California Vegetation. However, many grassland habitats remain un-sampled, un-described, and overlooked. 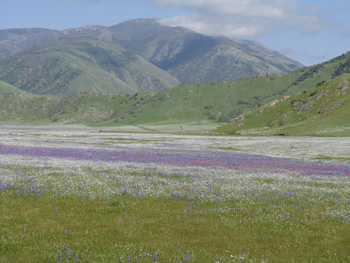 Recent funding through private donations, The Nature Conservancy, Bureau of Land Management (BLM) and Natural Resources Conservation Service (NRCS) has enabled us to begin a second phase of our initiative: Conducting additional field surveys to categorize the diversity of grassland types throughout the state. CNPS staff collected over 300 new herbaceous surveys in 2010, and we revisited 24 surveys to capture the summer variation in vegetation. We also created a pilot vegetation map for 10,000 acres of the Carrizo Plain National Monument to test the feasibility of fine-scale mapping of herbaceous vegetation.

CNPS submitted a new proposal to NRCS, under the California Conservation Innovation Grants (CIG) program, which was recently approved! Over the next two years, this NRCS grant will support new surveys on private ranchlands to examine how plants vary over time in grasslands, especially annual herbs, by allowing us to revisit and re-sample field sites. In particular, we intend to identify plants that are characteristically present and persistent within different grassland types, and also non-native plants that may be impacting ranchlands. We will be comparing this to a study of vernal pool vegetation (cf. Buck 2006) where certain native herbs were persistent and important in categorizing vernal pool types. The data will allow us to better describe, classify and manage grasslands.

This fall, we will analyze new and existing data to develop a more comprehensive classification of grassland vegetation. Through this project, we plan to describe and validate new herbaceous vegetation types, such as Spanish-clover fields (Lotus purshianus) and common monolopia fields (Monolopia lanceolata). Ultimately, we are expanding the definition of grasslands to include native forbs as important and sometimes dominant plants.

Future actions will involve collaborating with partners to conserve and restore a representation of California grasslands and educating landowners and the public about the values of grassland habitats. Visit the CNPS Grasslands page for more information about grasslands in California or to learn more about CNPS’s Grassland Initiative or contact Jennifer Buck-Diaz at jbuck@cnps.org.

Jennifer Buck-Diaz is a Vegetation Ecologist with the CNPS Vegetation Program.