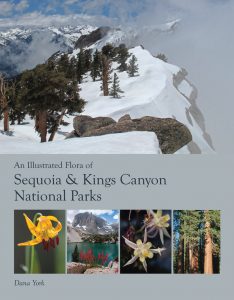 July 18, 2018, Sacramento – The California Native Plant Society (CNPS) is pleased to announce its latest publication: An Illustrated Flora of Sequoia and Kings Canyon National Parks by Dana York. This latest book from CNPS Press is the first comprehensive guidebook of the Southern Sierra Nevada and is available now at store.cnps.org.

Sequoia and Kings Canyon National Parks are located approximately 84 miles southeast of Fresno, Calif., and feature a range of diverse flora, from the legendary giant sequoias to pygmy alpinegolds that grow on desert-like ridgetops. Capturing this biodiversity, York’s books covers 1,809 species, subspecies, and varieties of plants with more than 1,500 illustrations and species descriptions.

“Dana’s book is an important contribution to our understanding of this beautiful region,” said CNPS Executive Director Dan Gluesenkamp. “It’s a must-have for students, scientists, or anyone with an interest in these stunning parks.”

Based in Humboldt County, York began working on the book in 1995 as part of his master’s thesis. During that time, York created a database of nearly 10,000 collection records, including 2,000 records of his own developed during more than 150 trips in the southern Sierra Nevada.

“All those years of data collection made this book possible,” York said. “It’s a thrill to see this book come to fruition and be able to share this information with the public.”