In Pruning Native Plants – Part 1,  I wrote about why we might want to prune our native gardens. Later, I’ll talk more about seasonally appropriate pruning and ideas for various garden styles. In spring, when we do very little pruning, it is a perfect time to think about proper pruning cuts and tools.

Generally, pruning cuts can be categorized as Tipping or Thinning. Each is appropriate for different outcomes.

A structurally healthy tree or shrub’s branches grow up and out.

Tip pruning shortens an elongated stem or twig that’s just a few millimeters or up to a quarter-inch in diameter. This is useful when you have some exuberant growth extending far beyond the rest of the plant’s canopy, or when you want to reduce an entire canopy. Typically, tipping cuts are made with hand pruners. These cuts are best made at the end of a plant’s growing season, but can be used judiciously throughout the year to neaten things up.

Tipping cuts are the safest, least aggressive cuts a gardener can make, because the wound is very small, and occurs at the strongest place on the plant. I’ve heard people compare it to “deer browsing” (a very theoretical comparison to an idealized deer who only nibbles, then keeps on moving). The task of ‘shearing’ is really a whole bunch of tipping cuts carried out by long blades. Woody plants usually respond to tipping cuts (by tools, deer, or wind!) by sending out multiple stems of new growth just below the cut. It results in a bushy tip. That’s why hedges seem denser than unsheared plants, on the outside, at least. Shearing can be done two or three times a year–but only while the plant is putting out new growth!

Among Aesthetic Pruners, thinning cuts are considered the most effective and valuable technique for showing off the beauty and natural habit of a woody plant. (We’ll talk about enhancing a plant’s natural habit more, another time.)

Make thinning cuts at the base of a stem or branch, and completely remove it. But be conservative about how many thinning cuts you make each year; these cuts remove a lot of the tree’s food-making capacities, they create wounds that weaken and expose the plant to disease, and they open up the trunk to more sunlight and potential sunburn. Oh, and one more thing: you can’t glue the branch back on if you regret the cut!

An aside: Just like its stems and branches, the energy of a plant is always moving up and out; that’s where the strongest areas of a plant are. Conversely, the inside and lower areas are weakest; if left to itself, the tree would shed growth in those areas. Also, the highest point on a tree is the place where the most growth is going to occur. Arborists call the highest reaching stem on a tree its “leader.” In a future installment, we’ll talk about how to reduce the height of a tree with releadering cuts — a combination of thinning and tipping cuts that avoids the very damaging and ugly assault known as tree topping.

Two rules of proper pruning help a tree heal pruning wounds. The first is the preservation of the branch collar. At the base of every branch (but not of the tree’s leader) is a slightly swollen band of tissue that has the capacity to grow over the wound. When making a thinning cut, always cut just beyond the edge of this collar tissue. (As a corollary, never leave a stump beyond the collar. It just won’t heal!)

The second rule addresses the size of the branch that’s to be removed. This is the one-third rule, that dictates that, when you are making a thinning cut, the stem that remains should be at least 1/3 the diameter of the one you want to remove. This may be a difficult concept, so see the illustration.

Whew! We’ve covered a LOT of techniques here. While I hope that this serves as a good reference, I encourage beginning pruners to search out hands-on classes at local nurseries and community colleges. Take your time practicing these concepts — and speaking of time, remember that the WHEN of pruning is just as important as the cuts themselves! I’ll discuss timing in the next installment.

Let’s talk about proper tools for healthy (for the tree), safe (for you!) pruning. There are two kinds of hand shears in stores: bypass pruners, where a sharp blade cuts, and anvil pruners, which crush. Crushing leaves a jagged edge that’s hard to heal, so I only recommend bypass pruners. These come in different sizes to fit your hand, and can be sharpened when they get dull, making them a worthwhile investment.

You’ll want a handsaw for larger cuts. When you shop for a saw, ask a lot of questions about how to use it. My favorites have a special teeth design that cut on the pull, rather than in both directions of saw movement, and I like the rhythmic effort they encourage. Many of them have replaceable blades instead of ones that can be re-sharpened.

Whichever styles of pruning tools you choose, be sure that you keep them sharp: the tool should be doing the cutting without undue labor by you! And, when you are preparing to make a cut, be sure to use the appropriate tool to the job. Don’t try to use your hand pruner to cut off a branch that is one inch in diameter!

To maintain my tools, I always keep on hand a diamond file or whetting stone and oil, and clean and sharpen my pruners before storing them away to avoid rust. Sharpening technique involves moving the file across the full length of the beveled edge (only one side of the blade) while maintaining a narrow angle of about 15 degrees. Move the file in only one direction across the blade. A good gardening shop can demonstrate.

It’s important to remember that some diseases can spread by tools, so do some homework before you prune, and find out what your material is susceptible to and how to avoid spreading it. For example, plants of the rose family carry fire blight; there’s an extensive list of plants that can carry the pathogen Phytophthora ramorum that causes Sudden Oak Death or SOD. Be sure to clean your blades with alcohol before, after, and between cuts, especially if the plant you are working on is infected. 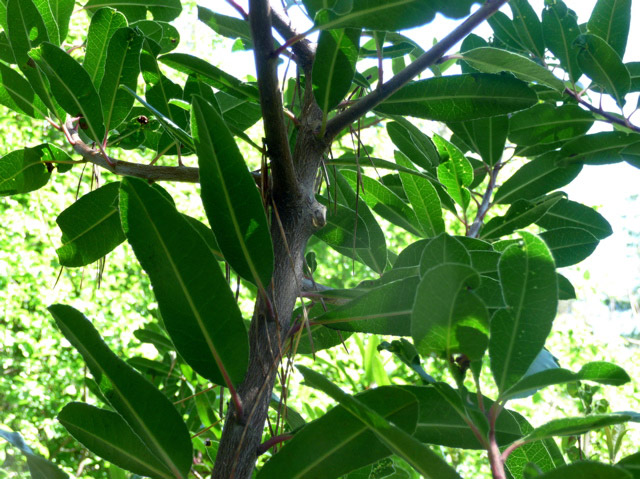 Allison Levin is a member of the CNPS Marin chapter. She is an aesthetic pruner and native plant consultant living in Sausalito and working in the greater SF Bay region.