At first glance, not much appears to be happening in the native garden in late summer. Aside from a few blooms of California fuchsia (Epilobium canum), California goldenrod (Solidago velutina ssp. californica), and perhaps a farewell to spring (Clarkia) , most plants have finished up their show and appear to be in stasis, lying dormant in anticipation of the fall rains.

Your garden is not as dormant as it appears – most of those plants that have finished up their spring show are quietly producing as many seeds as their stores of water and nutrients can muster. It’s this time of year when a gardener has the opportunity to harvest some of that bounty to populate their garden the following year.

Until I know what to expect from a particular plant, I like to collect a generous amount – friends are usually happy to take any extra plants you may produce.

Every plant has its own time table for when its seeds are ripe. Many, if not most native plants’ seeds are ready to harvest between June and October. Depending on the type of plant and the type of fruit produced, there are varying signs to look for to tell if the seed is ready to be harvested. In general, if the seed comes away from the plant freely, as with grasses, the seed capsule is dry and tan, as with Monkeyflower (Mimulus) and Sage (Salvia), or the fruit is pulled from the plant easily, as with currant (Ribes) or huckleberry (Vaccinium), then the seed is ripe and viable.

In addition to ripening at various times, some plants hold onto their seeds far longer than others. Clarkias will generally drop a few seeds per day over a period of several months; most lupines (Lupinus) fling their seeds far and wide with an audible pop a mere day or two after reaching maturity. As years go by you develop a mental calendar of when things ripen, but for plants you haven’t collected from before, you want to start checking the pods early, rather than come back to the plant long after all the seeds have dropped. A tip learned the hard way – if you’ve been procrastinating and rain is in the forecast, get out and collect! Many plants will lightly hold their ripened seeds for months, and drop every one with the first splash of raindrops.

So, a plant in your garden has finished blooming. What do you look for? You’re probably aware that seeds form where flowers once were, so lean over and inspect the flowering portion of the plant. Chances are you will see some sort of pod or fruit forming (on some plants, such as monkeyflower, this pod may be hidden inside the papery remains of the spent flower). If the pod appears dry and woody, not green and succulent, try to crack it open along one edge. If the seeds inside are a dark brown or black, then they are ripe and you are free to collect them. If the seeds appear green and undeveloped, then leave the plant be, and check again several days or a week later. For plants that produce fleshy berries or fruits, such as coffee berry (Frangula californica), currant (Ribes), or thimbleberry (Rubus parviflorus), you want to wait until the fruit is soft and detaches from the plant easily to ensure the seeds inside are ripe and viable.

The amount of seeds in one pod or fruit varies considerably by species, as does the germination rate. Until I know what to expect from a particular plant, I like to collect a generous amount – friends are usually happy to take any extra plants you may produce. Break open a pod or a fruit to get a rough idea of how many seeds are there, and collect accordingly.

For a certain few plants, collecting the seeds before they are ripe is actually a good idea. There are a few reasons you might do this. Some plants, such as our local globe lily (Calochortus albus), have downward-hanging seedpods that drop their seeds as soon as they are ripe. Some other plants, like certain Ceanothus and lupine species, will explosively propel their seeds outward once they ripen. A select few, such as Trillium, are irresistible to dispersing insects, so collecting while they are green ensures that you will be able to collect any seed at all. For these plants it is best to collect flowering stalks when the seeds have almost ripened and immediately place them in a vase of water. Change the water daily until the seeds are ready to harvest. If the seed drops from the plant, place the vase on a clean paper sheet or other area where the seeds will be easily collected. For the plants that fling their seeds outward, placing the vase and developing seedheads inside a closed box or paper bag folded shut will keep the seeds from scattering to the far corners of the room. Be prepared to be startled awake by seeds rattling off the inside of the box or bag!

Label your collections, preferably as soon as you make them. I label my collections with the date (including year), the botanical name of the plant, and location information.

Cleaning seeds thoroughly before sowing is an important step. If seed is sown with a large amount of chaff (dry, non-seed plant matter), the extraneous material will decay in the moist seed flat, increasing the chances of a pathogen spreading to your seedlings. For seeds that are borne in a fleshy fruit, the fruit can decay, but can also act as a germination inhibitor. Keep in mind that many of these seeds have evolved to be “cleaned” by the gravel and acid of a bird’s digestive tract, so you’ll need to be thorough as well (or buy a bird).

As you clean your seed you will reach a point of diminishing return, where more time spent will only get the seed a little bit cleaner. I used to agonize over the last little bit of chaff or pulp clinging to a seed, and it’s true, perfectly cleaned seed is quite pretty, but now I don’t sweat it so much. As long as you remove the bulk of extraneous material from your seeds, your seedlings should do just fine.

If seed is going to be stored for any length of time, it must be completely dry or it will likely rot. (There are a few exceptions to this; some seeds such as Trillium and burning bush (Euonymus) are harmed by drying out). Make sure the seed is dry and put seeds into paper envelopes in a dry, dark place such as a desk drawer.

For most of the berries I collect, my first step in cleaning is to place all the fruit I’ve collected into a ziploc bag, seal, and mash the fruit through the bag with my fingers. I let the fruit decay for a few days, mashing the fruit periodically. After a few days to a week, the pulp will have decayed from a firm substance to a fairly watery one. Fresh berry pulp tends to cling tenaciously to seeds; rotted pulp tends not to.

Dump the mass of pulp and seeds into a large bowl and fill 2/3 with clear water. Rub the pulp/seed around with your hands, squeezing and rubbing the seeds to remove as much as possible. Carefully pour most of the water off – the seeds will mostly sink, while the lighter pulp will pour off. Refill the bowl and repeat several times. If all goes according to plan, you’ll have a collection of nice clean seeds at the bottom of the bowl.

Certain species have especially tenacious pulp; for them, a quick trip in the blender along with 1/2 cup water or so will usually remove stubborn pulp. Quick bursts are best and be careful not to overdo it, as damaging the seeds is a concern with this method.

After the pulp has been adequately removed I fill a container with 1-part hydrogen peroxide and 5 or so parts water, and add the seed. This acts as a mild disinfectant. Stir them around for a minute or two, rinse thoroughly, and your seed is now clean. 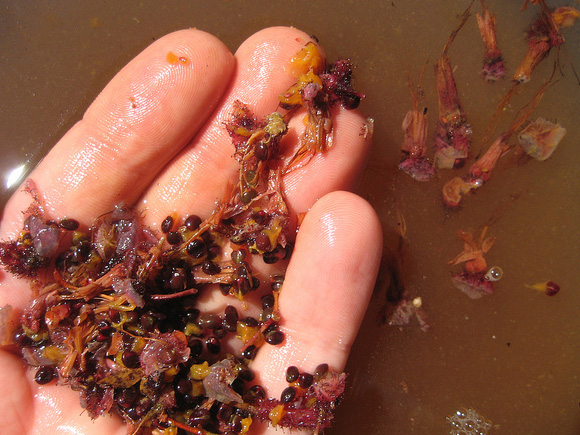 When I collect seed in intact, closed capsules, from Penstemon, Mimulus, Iris, etc. the first step I take in cleaning is to remove any plant material outside the actual seed pod – leaves, dried flower remnants, the flower stalk itself. It’s easier to remove it now than have to separate it from the seeds later. Once I have just capsules and seeds, the exact approach varies with the plant.

Many plants such as coyote mint (Monardella villosa), sage, and coral bells (Heuchera) hold their seeds in open ‘cups’ on the seedhead. This makes cleaning them quite easy. For these species, I put the seed heads in a paper bag and shake it vigorously for a minute or so. I then pour the seed heads into a sieve held over paper. Many seeds and a bit of chaff will fall through. If you think there are still lots of seeds left, put the seed heads back in the bag, crunch them up a bit with your hands, and repeat.

Other species, such as douglas iris and monkeyflower, are better cleaned one pod at a time, over a bowl or clean sheet of paper. Simply pull open the pod and the seed should fall out, fairly clean as it is.

Some plants, such as golden yarrow (Eriophyllum confertiflorum), have lots of small seed in a tightly held cluster. The easiest method I have found to release these seeds is to gently crush them with a rolling pin, flattening and repiling the seed several times.

Once your seeds are “sifted”, they’ll be mostly clean but there may be a bit more chaff to deal with. Often using a strainer with slightly larger or smaller holes will do the trick, and the seeds will be ready to sow.

A final step to remove a significant portion of any remaining chaff is to winnow the seed, allowing the wind to carry away the lighter chaff while leaving the heavier seed behind. The larger/heavier the seed, the easier this step is. Place the seed/chaff in a large shallow bowl. With a circular up-and-down motion, you can winnow the chaff away. This takes practice – start cautiously, and be careful not to dump all your seed on the ground!

Kept in a cool, dark place, seeds of most native plants can be stored for years with only a slight loss in viability. I keep my seeds in paper envelopes in the drawers of a desk dedicated to this purpose.

Matt Teel gained his knowledge from conversations with his friends in the California Native Plant Society and from years of work at Yerba Buena Nursery, a nursery specializing in California natives.