The official magazine of the California Native Plant Society

I first met Barnali Ghosh during this year’s California Native Plant Week, back in April. Daily, she posted her interpretations of a series of native wildflowers, to the joy of all who viewed them. Barnali is a designer, community historian, and landscape architect, living in Berkeley, California. Her artistic interests, including Odissi dance, textiles, art, and of course native flowers, are woven into the photos she creates.

CALIFORNIA POPPY
I took my love of California poppy to the next level with this embodied re-creation.

What inspired her to dress as flowers? “It gives me delight!” she says. “I’ve always loved when colors match each other across materials. When I see friends dressed up, and we’re walking by a store, or a car, or a wall, or a flower, and their clothes match something, I get very excited. It’s just a quirk of noticing colors that I have.”

After completing an undergraduate degree in architecture in India, in 1999, Barnali moved to Berkeley to attend UC Berkeley’s landscape architecture program, and subsequently worked for a decade on public parks, schools, streets, and nature-based playgrounds. But there were challenges when it came to planting design and remembering plant names.“With the flowers in Bangalore, where I grew up, I had connections and stories to help me recognize the plants around me.”

Favorite flowers—including those used for festivals and on the trees that bloomed in her schoolyard when she was growing up—were how she connected to plants. That connection was harder to establish in her adopted home.

Eventually, Barnali moved on from her work as a landscape architect, and began to connect to plants in Berkeley in a new way. For at least a decade, she says, “I’ve walked the streets of Berkeley, and I’ve taken pictures of plants and flowers, visiting the same plants, becoming aware of their seasonality.” Four years ago, following the death of her father in Bangalore, she took to walking at night and taking photos of flowers, looking for “beauty in darkness.” When she returned to Berkeley, she continued her night walks. 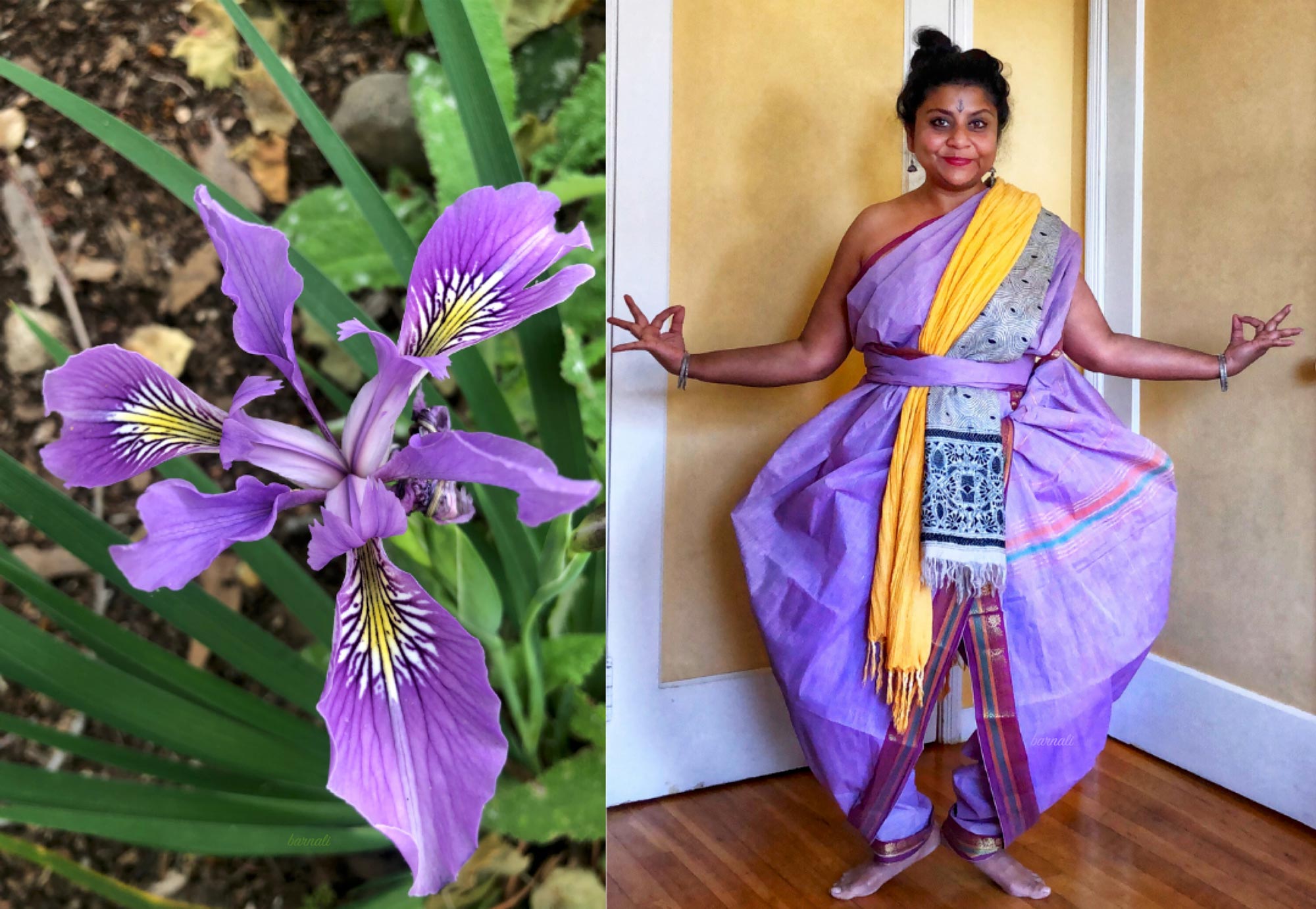 DOUGLAS IRIS
I’ve been in a purple phase! And could not move on without re-creating Iris douglasiana, purple with a touch of gold. The saree is a cotton from South India, and the black-and-white patterned fabric is a raw silk with kantha embroidery from Bengal.

Last year, during the pandemic quarantine, the Getty Museum challenge began. Using simple items from home, participants re-create well-known artworks. But Barnali wasn’t interested in re-creating only famous artworks; instead, she found an opportunity to elevate South Asian art and women artists, and to learn art history. (She has made over 50 art re-creations.)

Her walks also became even more important. One day, surrounded by wisteria in bloom, she realized she had a saree (aka sari) of the same color. “So I went home and I said,’ I’m going to dress like a wisteria!’ and then I thought, ‘Wait a minute! Is this a thing?'” On the day Barnali got her first vaccine dose, she wanted to do something special. She has always loved the ubiquitous orange California poppy, whose color reminds her of marigolds, a much-loved flower in India (She notes that marigolds are native to Mexico, not India!). On a whim, she posted to the CNPS Facebook page. She was nervous about the reception she might receive, as an immigrant dressing up as native flowers, but the comments gave her an immediate sense of belonging in that world. “That’s been my role in life—to be a bridge, a storyteller, someone who is able to connect various perspectives.”

It was serendipitous that it was California Native Plant Week. When the CNPS Instagram page reposted her poppy photo, she decided to continue for the remainder of the week. “I felt so inspired and encouraged by all the comments from people, and especially how much joy it was bringing.” In the photos, the main color is a saree roughly 16 to 20 feet long. She drapes the saree in various ways—some traditional and some not. 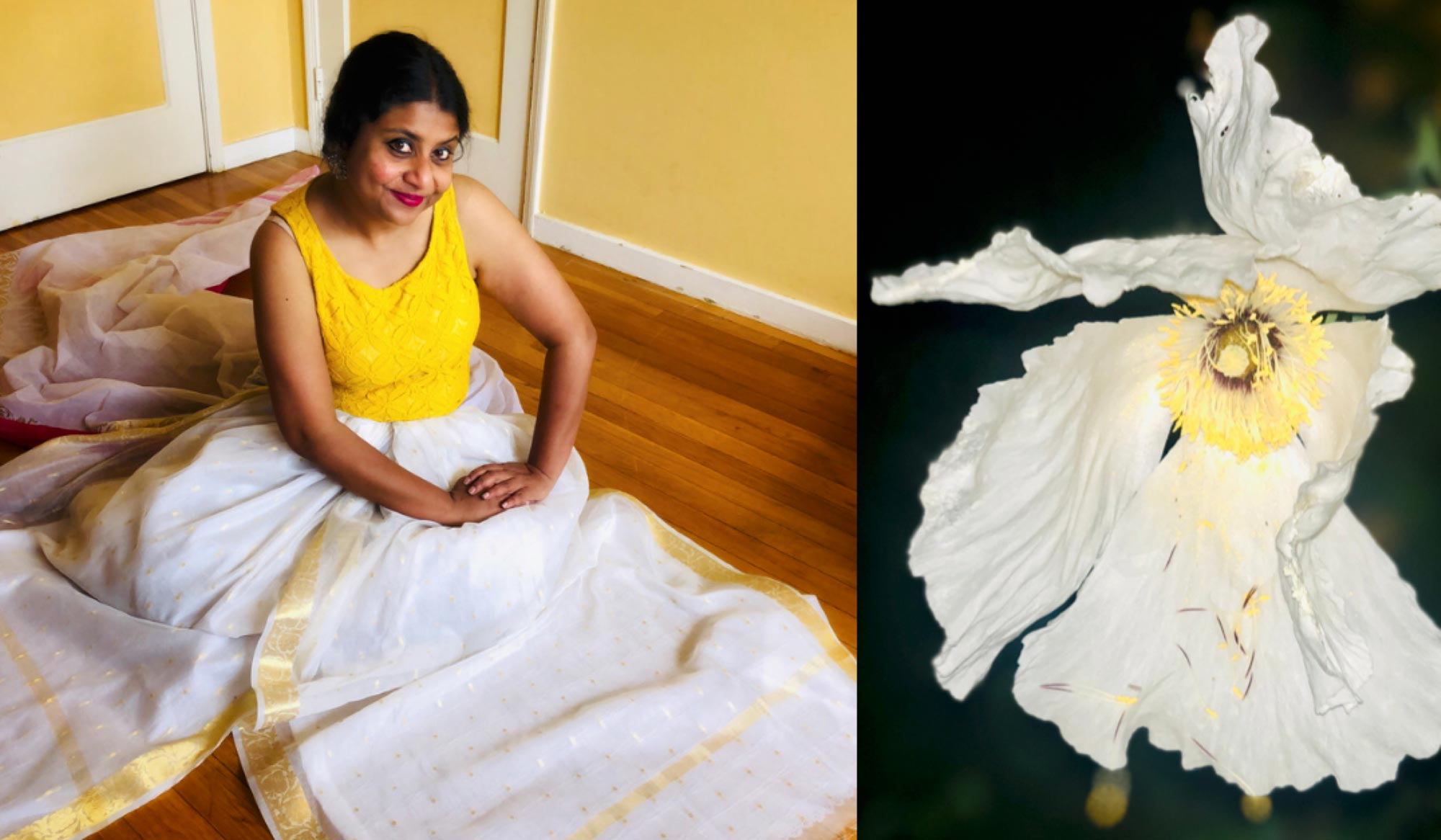 MATILIJA POPPY
The Matilija poppy reminds me most of a dancer. I love the specks of gold/pollen on the petals, and have tried to evoke that here with the fabric choices. And sometimes dancers sit. This pose is inspired by Odissi, and also Kathak, another South Asian dance form. 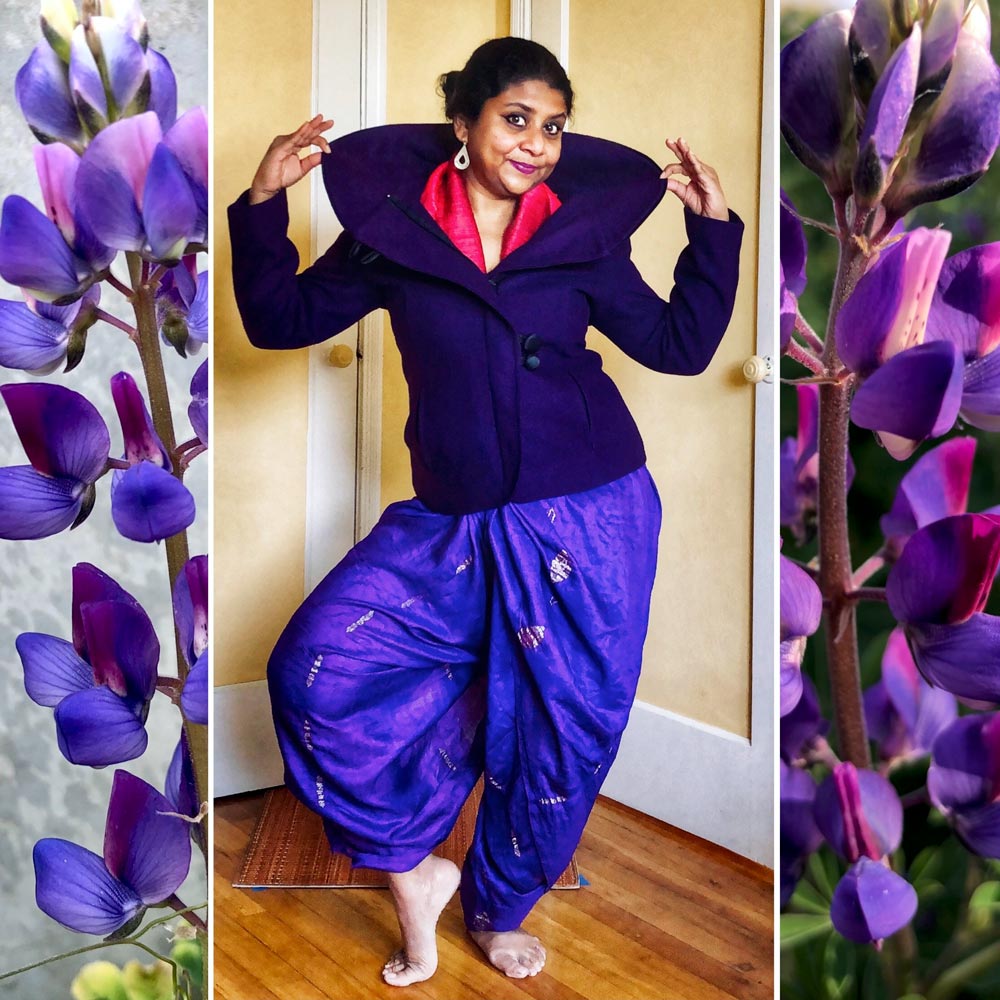 LUPINE
There’s a little patch of wildflowers in a parking lot near my home with poppies and lupine. I went out and took some photos, and for the first time noticed the pink. My lupine is a little less shy about showing off their colors.

CALIFORNIA PEONY
Every day is Earth Day. The pose is inspired by the bhumi pranam that we do in Odissi dance, before we start a dance performance or practice, asking forgiveness from the Earth for stomping on it. I’m not a religious person, but I still find this ritual grounding.

Many of the sarees in her collection, though ordinary, are treasured family heirlooms, and she is delighted to be able to share them in a way that tells a larger story. She takes the photos herself with the help of a tripod and a timer.

“The native plant conversation is so important to the sustainability of the places that we live in,” Barnali says. “But you can’t force people into these things. You need art and storytelling, the scientists and the photographers, the hikers, you need all of us working together.” Barnali has continued posting to other pages to honor native plants and sharing information about CNPS with people who might not otherwise know about the organization or its mission.

Since Native Plant Week, Barnali has posted Clarkia springvillensis, an endangered species that grows in the Tule River watershed, and Layia. As I completed this article, she posted a lovely Calochortus albus. “The saree is the first one I ever bought for myself when I thought I liked subtle colors. The dancing drummer’s pose is inspired by Odissi dance.” We look forward to more interpretations of our native wildflowers, thanks to Barnali’s artistic vision.

Note: Descriptions that Barnali posted on Facebook are shortened; for full descriptions, including credits and some thoughtful commentary, check out the posts on her page.

You can find Barnali on Instagram at @berkeleywali or follow her on Facebook. In addition to her delightful work with California native flowers, you can discover over 100 years of South Asian American activist history on the streets of Berkeley, California, on a walking tour with Barnali and her husband, Anirvan Chatterjee.

Become a member of CNPS and you’ll receive the quarterly print edition of the magazine.