A Conversation with Author Jenny Odell

Could “placefulness” cure our modern malaise? 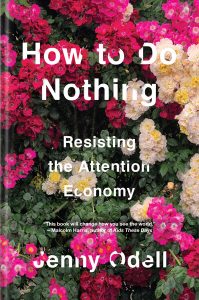 I recently found myself caught in a modern moment of choice: to be productive — or to just be. Traveling in New Mexico, I’d planned to use a precious spare hour to squeeze in a vigorous workout on a nearby trail. Instead, I came across a native plant demonstration garden.

“Just a quick peek,” my inner taskmaster chided. But within minutes I was absorbed in bird song and the enormous, pale pink blossoms of the Palmer’s penstemon (Penstemon palmeri). I soon lost track of time in that lovely interpretive garden, meandering through displays of the region’s riparian and high desert plants. Did I break a  sweat? No. But I sure was restored, my breathing more expansive, my thoughts quieter. I was reminded yet again that in returning to our natural world, we’re also coming home to ourselves.

Bioregionalism gives us a sense of home, a way to engage and feel a part of something at a time when everyone is pitted against each other and atomized. – Jenny Odell

Author and artist Jenny Odell says this homecoming  is desperately need today. In her new book, How to Do Nothing: Resisting the Attention Economy, Odell calls on each of us to reclaim our scattered focus and direct it instead toward a greater understanding and stewardship of our local ecologies. Recently, I had the privilege of sitting down with Odell, a Stanford professor and Oakland resident, to talk about the convergence of bioregionalism, art, technology, and the simple practice of noticing what’s around us.

L: Jenny, how do you describe the “attention economy,” and why is it a problem for both the human being and the environment?

J: If you were to look up attention economy online, you’d see it defined as persuasive design created to increase engagement on a platform. [Think about what you’ve  read about addictive features built into mobile apps.] But I would also count things like the wording of headlines and the trickle-down effect of those headlines, where the content created on these platforms is optimized to   get your attention. Even more broadly, I count personal branding and even this expectation that one should  always be reachable and be branding oneself to get ahead. On a personal level, it makes it hard to pay attention to the things you want to pay attention to or that might surprise you. I think it keeps people in a state of anxiety or perpetual hyperstimulation. You can’t focus. That naturally implies that it would be harder to pay attention to the things and the people that matter to you. It’s going to be hard to pay attention to that other life around you, especially when those other systems are really complex and require a lot of attention and patience to address.

L: You argue for a new “placefulness” or bioregionalism. How did you arrive at this conclusion personally?

J: Bioregionalism gives us a sense of home, a way to engage and feel a part of something at a time when everyone is pitted against each other and atomized.

This really came together for me in an odd confluence of events around 2015/2016: I started bird-watching and read “The Genius of Birds,” the 2016 election took place, and the Ghost Ship fire happened, in which a number of artists in my community died. I was deeply shell-shocked. As an artist, I felt unsure about what to even say or do at the moment. Then, I was befriended by these two crows on my balcony. I just started staring at them and wondering what they see, and as I write about in my book, that point of view became my escape hatch. It was the beginning of my realization that at all times I have access to a different understanding of myself through this shared environment simply by paying attention. It’s the only way I know of to reliably get outside of this myopic and narrow and overstimulated and fearful, isolated self that is cultivated online.

If I stare at a leaf for a long time, I start to think about the similarity between its vascular structures and something  like blood vessels or neurons. Dwelling on this kind of similarity reminds me that as forms of life, we’re not alone.

L: In your book, you use the story of the East Bay hills’ “Old Survivor,” a legendary old-growth redwood still standing today, as a metaphor for survival, resistance, and bearing witness. You also recount the ancient Taoist fable of The Useless Tree in which a carpenter scornfully rejects a gnarled, misshapen tree. Because the tree doesn’t meet the human’s limited definition of utility, it’s able to mature into a large specimen supporting many other creatures to whom it is indeed useful. So, what does it look like for each of us to be an Old Survivor?

J: Old Survivor has qualities that prevented it from being cut down for timber. In both stories, the punch line was how narrow the idea of usefulness was at one time. There’s a  sort of dark humor in seeing loggers looking up at this tree and seeing only timber. For humans, I watch people try to fit into all these different types of boxes. When we get to the point where we want to reject it all, our reaction can   be to want to retreat. Instead, we can try to embody some shape of resistance in the midst of something — right here in place. It’s  uncomfortable. It takes some courage. It’s going to come at some sort of cost, especially when all the forces around us are trying to get us to fit a different definition of usefulness. From the point of view of productivity or the way we value time and activity, you will appear to be doing something wrong.

If you’re optimizing your life or an environment for performance and production, something like conservation isn’t where you’re going to put your energy. The destruction that follows shows how narrow that value framework really is.

L: In questioning what it means to be useful, you contrast the characteristics of productivity with that of maintenance or stewardship. Can you talk about the difference and why it matters?

J: I think our common definition of productivity assumes that you’re putting something new in the world visibly in a way that can be measured using current systems. Anything that doesn’t fall into that becomes invisible or devalued. It makes things like maintenance disappear. Maintenance is the work that makes life possible,  something I’m reminded of by my mother, who not only raised me but currently supports foster children in transition. Historically, we can also see reminders of this in the caring and reciprocal nature of indigenous land practices and stewardship.

Our current version of productivity is a selfish one, so things like altruistically helping other people would not appear to be productive from a ruthlessly narrow version of productivity. There’s a scene in the book where I describe going to Elkhorn Slough. I’d never been there before and I just started crying. I had this feeling of gratitude – you know where you feel something is above and beyond anything you deserve. We are not treating this world like we should, because if you’re optimizing your life or an environment for performance and production, something like conservation isn’t where you’re going to put your energy. The destruction that follows shows how narrow that value framework really is.

If the problem is that people are spending too much time online, then we may have to go over to this area to reach them.

L: You’re a bird lover and describe your evolution from someone who heard “bird sounds” to someone who now recognizes the different calls of distinct species of birds. Plant people often have the same experience, moving from a state of what we call “plant blindness,” in which everything is a blur of green, into a more advanced understanding of individual plant species. As an artist and professor, how do you help people learn to see and observe what’s around them?

J: I teach an Introduction to Digital and Physical Design course where we have a field trip to Pearson-Arastradero Preserve, near campus. First we go to the visitor center. I want my students to think about how having that info at the beginning makes a difference in what they see the rest  of the time. I also have them use iNat [the online citizen science app, iNaturalist]. Later in the term, their final project is to make a walking tour of some physical aspect of campus that they think someone else hasn’t noticed. Their only goal is to give another person a different experience of that space than they’ve had before.

I’m always trying to collect examples from technology where instead of distracting from physical reality, it’s actually enhancing. I really have to say that iNaturalist has changed my life. Now when I’m on a hike, I find myself walking along and naming things to myself. I’m curious how things are going to change once I come into a sunny area of the trail. I feel like I’m there to have a meeting and to see what things are going to be like this time of year.

L: You speak to the importance of honoring the human animal in each of us — “that groundedness requires the actual ground.” How do you encourage your students, our first generation of digital natives, to care for that human animal?

J: I encourage processes of observation and listening and finding as many excuses as I can to get them outside, trying to create a space and time for them that is playful and experimental and not goal-oriented. I encourage them to come from a place that isn’t  fear-oriented and measuring  up to some scale.

Curiosity is another thing. I wish there was a word for it that didn’t sound so frivolous, because it’s the flip side to fear. Both are approaches to what we don’t know. It’s seeking to be surprised on purpose.

Curiosity is another thing. I wish there was a word for it that didn’t sound so frivolous, because it’s the flip side to fear. Both are approaches to what we don’t know. It’s seeking to be surprised on purpose.

L: How can organizations like CNPS help to heal a 24-7 society that is at once hyper-connected and severely disconnected from each other and our land?

J: Something like Calscape.org is huge. Somebody may not know it exists unless they look up a specific plant. It’s important to meet people where they are. Things like iNat or Calscape can become the gateway drug. Your interest is piqued, then you’re going to go and seek out more of those things. If the problem is that people are spending too much time online, then we may have to go over to this area to reach them.