Kat High is a gift to the world.

A Hupa Tribe descendant, Kat brings traditional Indigenous ecological knowledge to tend to native plants from both a spiritual and cultural perspective. You may have seen Kat interviewed on PBS as a part of the series titled Tending the Wild, where Kat talked about caring for a native plant garden, the sacredness of land and Indigenous ecological ways. She’s also been a guest speaker for CNPS Santa Monica Mountains Chapter numerous times over the last decade. I had the humble opportunity to hang out with Kat on a chilly January Tuesday afternoon over a glass of lemonade made from lemons in her backyard. Kat gave me a tour of her native plant garden, her music studio, and introduced me to her elder wolf-chow dog named Papa. I learned so much about native plants, harvesting policies, the importance of traditional Indigenous ecological knowledge, her family, and her love for 70’s punk music (she’s a big Talking Heads/David Byrne fan). In this interview, I ask her questions related to her lifelong connection to plants, what inspires her native plant work, and any suggestions for students interested in native plants and supporting Indigenous communities.

There are so many that are really involved in the work. But Indian people tend not to promote themselves. And so you don’t hear about them because they haven’t been self-promoters. But those are people that I look up to.

K: Oh a long time ago. We went camping. My dad was a horticulturist and developed varieties of Gladiolus. He was into caring for the land and taking proper care, mostly European plants, he was French. My mom got us interested in herbs and using them in cooking and growing them ourselves and seeing what was there in the environment. We use to go camping and see everything, so many people. At Haramokngna, Barbara Drake (Tongva elder), and the late Jane Dumas (Kumeyaay elder), and many others who knew the native plants of the San Gabriel Mountains, taught what native plants were there and how we could use them.

I did a TV show with Kat Anderson who wrote Tending the Wild, with Jane Dumas and Richard Bugbee, and it really got me aware of how native people in different parts of California talked about the earth and cared for it and it just kind of grew from there.

D: What projects are you currently working on?

K: I’m currently working on my own yard, number one. I’m developing it into a gathering garden and a model for other people to follow. I’ve gone on the Theodore Payne garden tours and they’re all gardens that you look at; my garden is one that you can gather from, and gathering was our way of taking care of the land and keeping it healthy. I’m also reaching out with the Resource Conservation District doing projects on the native perspective on native plants.

I am also encouraging those who teach about our native plants to also acknowledge the First People of that place who cared for and interacted with the native plants in that area. Here I acknowledge the Gabrielino-Tongva and the Chumash People. I’m also working at the Theatricum Botanicum on creek restoration and management of native plants. I’m working with Mountain Restoration Trust on various things — not just looking at native plants but interacting with native plants and taking care of them.

D: Was there a particular moment that defined your career?

K: This isn’t my career. This is my passion. I think it was getting Haramokngna started which was 1998, and looking at the native landscape there and really feeling how Native people fit in.
My tribe is a northern California tribe. So, now I work with the Satwiwa American Indian Cultural Center. I’ve worked there for decades, and it just wounded me seriously when they decided the native plant garden was a fire hazard, and they came and chainsawed it and threw it in the chipper. Obviously, the National Park Service doesn’t have that understanding of our interrelationship with it and how to manage it. They never allowed us gathering. The deergrass – can’t we come gather the deergrass? Can’t we come gather the rosehips? And, that’s the bureaucratic view of a facility rather than the environment. We fought to get the Chumash people, Mati Waiya and Dennis Garcia, to be able to have their solstice ceremony there and god forbid build a fire. Although it was a struggle, it was wonderful. We also had a California Indian storytelling festival there, and we had Indians come from all over California to talk about their land. We tried to have a California Indian basketweavers gathering there, but the National Park Service wouldn’t let them have fire, so they went to the Chumash Interpretive Center instead.

D: On that same note, how might public agencies, like the park staff, work better with and to support indigenous communities?

K: Allow more community gatherings, #1. Be open for community gatherings. Be open for plant gatherings. And sharing culture. Every park in the Santa Monica Mountains Park Service had Indian presence. How many of them talk about the Indian presence? #2: Topanga State Park a little bit and, Satwiwa, American Indian Cultural Center a little bit. But who talks about it? Non-Indian docents. Rangers. Allow more Indians to become the teachers of their culture.

D: Along those same lines, what policies for native plants or conservation do you wish existed?

K: Gathering permits. And along with gathering permits, management in a native way of those native plants. I mean the understory… you saw how I trimmed the elderberry. Is the elderberry trimmed out here? No. For its own health, it needs that. What about acorns? What happens to the acorns if people don’t gather them? Well a lot of them germinate and then you have 10,000 oak trees growing up trying to struggle for light and water and space. So Indians were a large part of managing the health of the oaks. I mean there’s scrub jays and woodpeckers and squirrels and everything else, but people were involved in this environment over 10,000 years.

D: Who inspires you to do the work that you do?

K: Ancestors. My elders, Barbara Drake and Jane Dumas. Winona LaDuke inspires me. Kat Anderson inspires me. Ron Goode, the Chief of the North Fork Mono is a real environmentalist. There are so many that are really involved in the work. But Indian people tend not to promote themselves, and so you don’t hear about them because they haven’t been self-promoters. But those are people that I look up to.

D: What qualities about them do you think would be inspiring to know about?

D: I’ve got two more questions. Tell us about your garden. What types of plants are you growing?

K: Old Bill. Because of my dad, we grew food for Bill. It was nonnative. It was hibiscus and red roses, and pineapple guava.

D: One more question and then I’d love for you to open it open for anything you’d like to share about yourself or your work. What advice would you offer students? It can be general, non-native plant world type of advice, or it could be related to native plants.

K: I always tell students, number one, honor your roots. Your roots are as valid as my roots. Feel that and know that. Number two, if you love this place, connect with native ways of understanding it to set down your roots in this place and own it. This will nurture you. It will make you stronger. It will help you grow and communicate. That’s what roots are all about. And if those roots are rootless and looking for something to connect to, I feel sinking them into the earth here which is valid and strong, is far better than finding gang relationships and things like that. Trust the roots to sink into this earth and strengthen you, and own it.

These days, with the overharvesting of white sage and other native plants, I would recommend growing your own in your own or community gathering garden. Work together in a network of community and sharing.

K: I’m left handed! I think that has something to do with things. I’m both a physical therapist and an occupational therapist. A physical therapist is very scientific; you know, how many feet have you walked? All that stuff. An occupational therapist is more the left-handed/right-brain creative aspect of things. My mom was an artist and my dad was a scientist.  I really hope that everybody can find that connection within them. The beauty and the knowledge, the science, to bring together to find in them.

D: What beautiful worlds. That balance of having them together. I noticed you’re a physical therapist, an occupational therapist, and you tend to native plant gardens. All of those are caretaking roles. In your role and career as an OT, what skills do you translate for tending to native plants or vice versa?

K: An occupational therapist looks at someone who wants to do something but has a challenge. I don’t like to say disability. They have a challenge. So the occupational therapist’s role is to breakdown the goal into achievable levels so that we can find a tool we can use to reach that goal or we can go about that in several steps to reach the goal. Gardening relates to that in many ways. Finding the right plants for you in your garden, finding the right soil and light, and everything to make them strong. How do we break this down into the best environment for this native plant to thrive? And, finding native plants that also thrive in the environment that you have. It’s breaking it down that way. 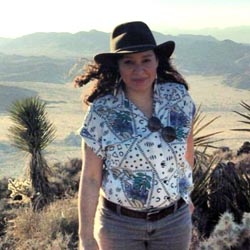 CNPS student advisor Demi Espinoza (she/her) is the daughter of working-class Mexican immigrants and the youngest of ten siblings raised in Riverside, California. She earned a bachelor’s degree in Sociology at CSUSB and is currently getting a Master’s degree in Urban Sustainability and GIS at Antioch University. Demi has worked on policy advocacy elevating transportation equity, racial equity and climate justice over the last 14 years. She currently works for the National Parks Conservation Association, where she works on environmental conservation policy within the California Desert Program. In her spare time, Demi is probably hiking with her dogs Dolly Parton and Kenny Rogers

Support the next generation of conservation scientists in California. Donate to the CNPS Student Fund today.