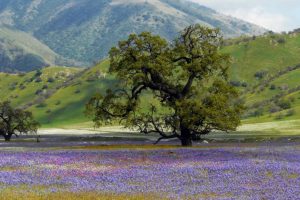 “The new reality of climate change requires a more thoughtful and systemic approach that considers the connections and the vast web of relationships that tie together the myriad elements of California’s ecosystems,” Governor Brown wrote in the order.

Gov. Brown issued the executive order in tandem with an ambitious action plan titled, the California Biodiversity Initiative: A Roadmap for Protecting the State’s Natural Heritage. The Roadmap is the result of a months-long collaboration between government agency employees, conservation organizations, and herbaria. CNPS Executive Director Dan Gluesenkamp served as a leading participant of the task force, guiding the development of the group’s  biodiversity charter and the subsequent action plan. The charter outlines the vision that is further described in the Roadmap’s principles and proposed actions. Long-time CNPS partners also participated, including the Jepson Herbarium,  Rancho Santa Ana Botanic Garden, and key plant scientists from the University of California.

As part of this effort, the Governor issued a Biodiversity Proclamation in May, creating World Biodiversity Day, and revised the 2018-19 budget to allocate $2.5 million to launch California’s Biodiversity Initiative. In an especially inspiring demonstration of the power of this new commitment, the Governor’s signing of California’s landmark Senate Bill 100 climate change legislation came with a release of an Executive Order specifically requiring that climate change solutions must not harm native plant biodiversity.

“Not only are the Governor’s actions a symbolic indicator of California’s genuine commitment to biodiversity, they provide immediate and concrete benefit to those of us doing this work,” says Gluesenkamp. “Now,  we must work together to continue and build on the momentum the Governor’s actions have produced.”

The action’s outlined in the Governor’s plan are approaches CNPS has tried — and perfected, Gluesenkamp adds. “CNPS projects are proving these work. Now it’s time to scale them up and complete the effort.”

With this important initiative, CNPS and partners will bring together the experts to complete the work that the Governor has detailed. The opportunity is great, and the time is now for California’s native plants!

Your Support Makes a Difference!

Your support makes the CNPS Mission possible. Please consider making a donation today to support our work to protect and advance California’s biodiversity. If you’re not already a member, joining CNPS is the best way to get started.