By Nick Jensen and Brendan Wilce

California’s wildfire seasons are longer and more extreme than any period on record, with growing impacts to public health, human safety, and precious species like the giant sequoia. Leaders at both the state and national level have responded accordingly, allocating unprecedented resources to address the urgency surrounding wildfire. But in the rush to fix the problem, we risk making it worse.

The scale of extreme wildfire in California requires quick and decisive action, but to avoid further catastrophe, these actions must be implemented with careful consideration of their environmental impacts. Using best available science, California can break the cycle of megafire, improve both landscape and community resilience, and protect biodiversity. Misguided or rash actions, however, can make an area even more vulnerable to fire while destroying irreplaceable habitat and reducing carbon sequestration. For these reasons, CNPS and partners have been tracking the government’s wildfire mitigation projects to identify both helpful and harmful projects alike.

This month, we’re focused on three federal efforts now in motion: the Save Our Sequoias Act, the Plumas National Forest Community Protection, and the problematic Los Padres National Forest (LPNF) Ecological Restoration Project (ERP). In taking a look at what’s happening with the Los Padres National Forest Ecological Restoration Project, we urge readers to join us in asking the U.S. Forest Service to conduct a full Environmental Impact Report of the proposed project. Please read on for details and specific instructions.

What Is the Ecological Restoration Project?

The Los Padres National Forest ERP proposes landscape-scale fuelbreak treatments, many of which will be ineffective at stopping the spread of fire, while potentially impacting at least 94 rare California native plant species. The ERP proposes to treat more than 235,000 acres of the LPNF–nearly the size of San Diego–with actions that include “mechanical and hand thinning, mastication, mowing, prescribed fire, grazing treatments, and planting and seeding of buffers or along roads.” The proposed plan breaks up the treatments into “Forest Health Treatments,” which will occur on more than 48,000 acres of forested habitats, and “Fuelbreak and Defense Zones,” which will occur on the remaining 186,000-plus acres in forested and non-forested habitats (i.e. chaparral and grasslands), making this one of the largest fuelbreak projects that we have seen. The project would install fuelbreaks 100, 300, and up to 1,500 feet wide in grassland, chaparral, and forest habitats, respectively. These treatments would remove understory vegetation across wide swaths of forest along wilderness corridors, greatly reducing the presence of shrubs and perennials, which are a main feature of the beauty and natural feel of these landscapes.

Many of the areas proposed for treatment are far from existing communities (e.g. clearing could be done along off highway vehicle routes in remote areas), and along Big Pine Road, which separates the San Rafael and Dick Smith Wilderness areas. Some 35,000 acres proposed for treatment are located within inventoried roadless areas and would be formally designated as wilderness if Congressman Salud Carbajal’s Central Coast Heritage Protection Act is signed into law. This would protect 288,672 acres of wilderness, create two scenic areas encompassing 34,882 acres, and safeguard 159 miles of wild and scenic rivers in the Los Padres National Forest and the Carrizo Plain National Monument. 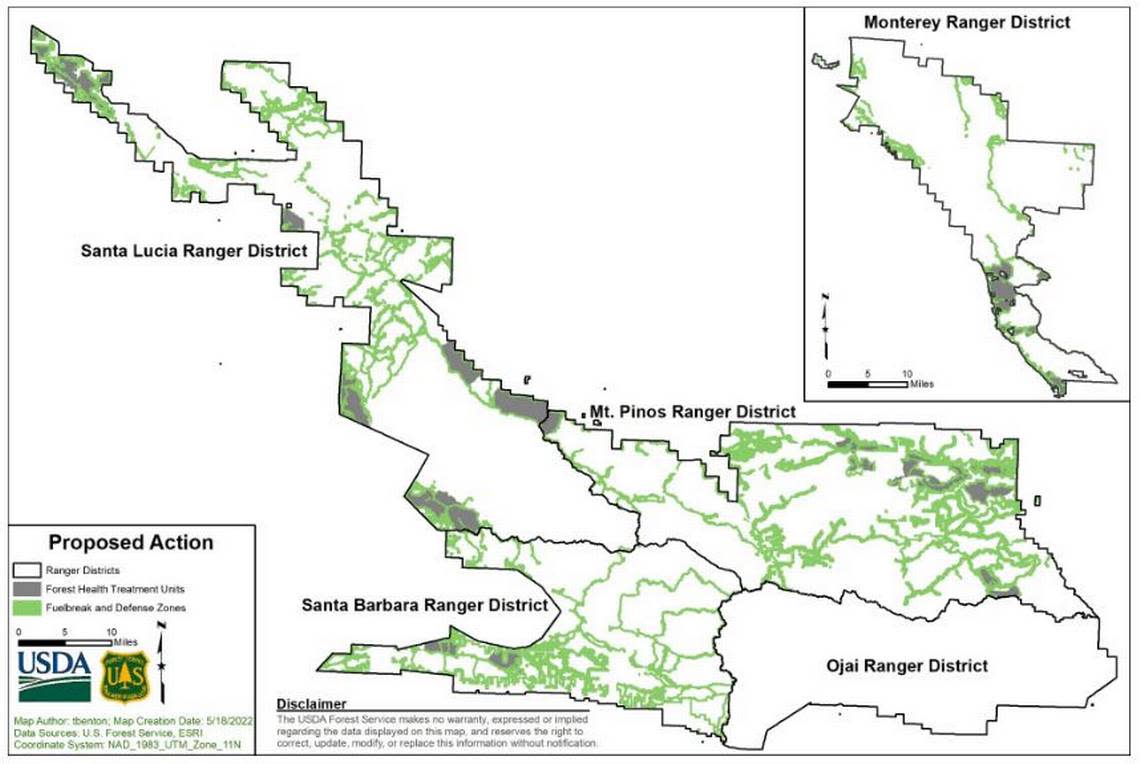 CNPS supports sound land management practices, including some of the proposed ERP measures and the placement of fuelbreaks near at-risk communities, but we question the logic and defensibility of thousands of acres of remote fuelbreaks that are unlikely to protect adjacent communities from fires originating from the national forest. Research in the Los Padres National Forest has shown that remote fuelbreaks do not work as a standalone defense to stop the spread of fire and that fuelbreaks are only effective when they provide access to firefighters. In severe weather conditions, these fuelbreaks are unable to stop the spread of fire even with the support of firefighters. Sending firefighters into remote areas to fight fires that do not threaten lives or structures puts them at unnecessary risk to their lives and safety and is a costly use of resources that would have little benefit or chance of success.

Additional studies show that the availability of fuels (including plants) on their own is not the driving force of the most devastating fires across Southern California. Extreme winds can create severe fires even where previous fires and fuel treatments have reduced fuel loads. Furthermore, a review of the California Department of Forestry and Fire Protection’s Fire and Resource Assessment Program (FRAP) completed by Los Padres ForestWatch found that the Los Padres National Forest averaged close to 30 wildfires each year from 2010 to 2020 and only a very small percentage of these fires grew to become conflagrations that threatened communities. By and large, these blazes (like the Thomas Fire) are driven by Santa Ana or Sundowner wind events.

Models of fire behavior and empirical observations from past wildfires indicate that when fuel moisture is low and wind speeds exceed 50mph, as is often the case during Santa Ana events, embers routinely fly greater than a mile. Under these conditions the probability of those embers igniting spot fires well in advance of the flame front can be close to 100%, leading us to conclude that many of the fuelbreaks proposed in the ERP are unlikely to slow the spread of future wind-driven fires, even if fire intersected these remote fuelbreaks. One study in the LPNF showed that 79% of fires never intersected a fuelbreak and approximately 40% of fuelbreaks were never intersected by fire. Fuelbreaks also fragment habitats and have been shown to be a major factor in the introduction of invasive grass species. The near-certain ineffectiveness of some of the actions proposed in the ERP is juxtaposed with the near-certain reality that this project threatens a large number of rare plants, leaving a cost/benefit analysis leaning heavily toward potential costs.

An Alarming Threat to Rare Plants

In order to understand the potential impacts of the ERP on rare plants we intersected the GIS layer of the project footprint with the layer of rare plants in the California Department of Fish and Wildlife’s California Natural Diversity Database (CNDDB). The ERP project area is not well documented, and the CNDDB only contains information on rare plant populations that are currently documented. Shockingly, the ERP footprint contains 531 occurrences of 94 rare plants. If additional surveys were performed today, botanists would likely locate far more occurrences and/or species in the project’s proposed locations. The documented rare plant occurrences we know of today comprise more than 1% of all known rare plant occurrences in the entire state of California located in approximately 0.2% of the state’s footprint. This is a staggering number of rare plants and occurrences. Furthermore, 20% of all known occurrences of 35 rare plants occur within the project’s footprint, and more than 50% of the occurrences of 12 species would be affected. Of the four known occurrences of Butterworth’s buckwheat (Eriogonum butterworthianum), three of them are within the project area, potentially affecting 75% of the known populations of this rare species. Any impact to plant diversity would also affect the pollinators and other wildlife that may depend on a specific plant species or community. Not all proposed treatments in the ERP would be bad for all rare plants. However, the magnitude of the potential impact should be a cause for alarm and warrant a full environmental review.

How to Take Action

CNPS urges our members and other concerned citizens to send a comment letter asking for a full Environmental Impact Statement of the ERP to provide a more comprehensive analysis of potential impacts and more avenues for public discourse.

You can use this sample letter as your template. Please personalize your letter by including why you love the Los Padres National Forest and the biodiversity that it supports.

Comment letters should be addressed to Kyle Kinports, LPNF Forest Planner and Vegetation/Fuels Program Manager, and can be submitted via this online form through September 27.